THE CAMINO DE SANTIAGO AMONG VOLCANOES

The island of Gran Canaria became the first location for the Camino de Santiago outside the Continent, thanks to the fact that, in 1965, Pope Paul VI granted to Gran Canaria by papal bull the same privileges as those bestowed in the Galician and Compostela Jubilee year. This papal bull was renewed in later holy years: 1971, 1976 and 1982, until Pope John Paul II, in 1992, granted it “in perpetuum” (in perpetuity). This was to allow the jubilee graces from the 1993 Santiago Holy Year to be celebrated by the pilgrims who visit the Jacobean temples in two towns on Gran Canaria: Gáldar and Tunte.

As a result of these events, a road has been drawn from south to north, towards the interior of the island, uniting the history of the Conquest and the legend of some Galician sailors.

The trail of this Camino passes among volcanoes, in a 66-kilometre itinerary where the pilgrim is able to discover and admire many hidden attractions on the island of Gran Canaria, not only sun and beaches. During the journey, you will be able to visit the  Maspalomas Lighthouse and Oasis, the Fataga Ravine, the Arteara Necropolis (the  island’s largest aboriginal cemetery), the whitewashed village of Fataga and the small  hilltop town of Tunte, the Paso de la Plata (a cobbled path along the summit), the Ventana  del Nublo (a stone bridge caused by erosion, forming a window looking out onto the  imposing Nublo Rock), the Degollada Becerra (a viewpoint looking out onto a stunning  gorge and mountains – without doubt, the most renowned skyline in the whole of Gran  Canaria) and the Cruz de Tejeda (a sombre carved stone cross on a mountain pass at  1580m (5184 ft) above sea level, marking the geographical centre of Gran Canaria). You will also discover cattle transhumance, neighbourhoods in middle-mountain regions, as well as the local cheese called “Queso de Flor” which has protected designation of origin.  Moreover, you can visit the historic town of Gáldar with its Museum and Archaelogical Park with rock drawings – the “Cueva Pintada”.

This Camino de Santiago, very popular on the island of Gran Canaria, currently has the support of regional government and local authorities to begin maintenance works and proper signposting.

The Camino de Santiago on the island of Tenerife: a reality

The area of involvement of this Association covers the Province of Santa Cruz de Tenerife, which comprises (east to west) the islands of Tenerife, La Gomera, La Palma and El Hierro.

This route alternates between mountains, valleys, ravines, volcanoes, beaches and the  unique Canarian pools, authentic small ecosystems full of life, also known as tidal pools  that appear like natural pools of seawater. The geomorphology of the Canary Islands has allowed the sea to enter coastal areas creating these idyllic places, with their crystal clear waters.

This Camino de Santiago is divided into eight stages, totalling 172 kms and finishing at the Jacobean temple in Gáldar. Pilgrims can be granted indulgences and collect the certificate that accredits their pilgrimage, as would be the case in Santiago de Compostela in Galicia. Some pilgrims may wish to walk this route in longer or shorter stages, depending on factors such as their physical condition, the weather or the availability of accommodation.

The pilgrims will travel to the north of Tenerife, starting in the westernmost municipalities of the island: Buenavista del Norte and Santiago del Teide, visiting towns such as Garachico, recently named the most beautiful town in Spain and whose current appearance has been sculpted by the volcano Trevejo which erupted in 1706. You will also visit the Orotava Valley, towns such as Icod de los Vinos, San Cristóbal de la Laguna and the capital, Santa Cruz. In this last city, pilgrims will take a ferry to the neighbouring island of Gran Canaria, to the port of Las Nieves in Agaete and, after 13 kilometres, they will be in the Plaza de Santiago, in front of the Jacobean Temple of the City of the Knights of Gáldar.

Currently, the Camino is not fully maintained nor does it have the usual Santiago signposts, but it already constitutes a memorable journey through the history and culture of the “Guanches” (Aboriginal people of this island).

More information on this Camino can be found on the Association’s website:  www.caminosantiagoentrevolcanes.com

The stages are recorded on a GPS which can be downloaded and there is a description of each itinerary. Throughout each stage, available accommodation is detailed (hostels, hotels, rural houses, etc), which enables each individual to plan their own route. All accommodation is privately owned, there is currently no state-owned accommodation.

We hope that local government and regional authorities will take ownership of this Canarian Camino, which is already a reality, and support and undertake its maintenance and signposting. This would be a significant contribution to the promotion of knowledge of nature and culture as well as to the economy of the island.

A route through the southern part of the island of Tenerife is being studied and this should come into existence in the near future. It would include the town of Vilaflor de Chasna and a diversion for the more experienced hiker to the summit of Mount Teide (3,718 metres), spending the night in a refuge at 3,260 metres. It will also include the Basilica of the Virgin of Candelaria, patron saint of the Canary Islands, and various sculptures of Santiago. It will end in the capital, Santa Cruz de Tenerife and pilgrims will join other pilgrims who come from the north to reach the Jacobean temple of Gáldar in Gran Canaria.

The Camino Among Volcanoes from El Hierro, La Palma or La Gomera

A more ambitious project would be to unite the other islands of the province of Santa Cruz de Tenerife to the Jacobean temple in the city of the Knights of Gáldar.

The Camino Among Volcanoes on La Gomera will begin in the town of Playa Santiago, in the municipality of Alajeró. This place has been chosen because it has a hermitage dedicated to the Apostle Santiago. It is a route of approximately 25 kilometres which ends in San Sebastián de La Gomera, the island’s capital.

The Camino Among Volcanoes on El Hierro will begin in the municipality of Valverde, the island’s capital. The hermitage of the apostle Santiago will mark the beginning of the pilgrimage, which will end is a descent to Puerto de la Estaca, a hike of approximately six kilometres.

The reason why the Camino Among Volcanoes on each of the three islands ends in their respective ports is that these ports have a connection with the Los Cristianos port on the island of Tenerife. The pilgrims who start their Camino on these islands should continue the pilgrimage through the island of Tenerife in the direction of Santa Cruz, the capital, and then take another boat which will take them to the neighbouring island of Gran Canaria and finish at the Jacobean temple of Gáldar. 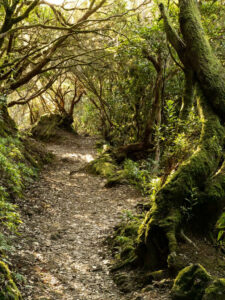